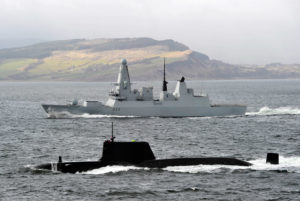 GMB Comments On Expected Commons Trident Vote
Government needs to get on with vote on Trident submarine fleet to give much needed stability and security to workers and industry says GMB.
GMB, the union for defence workers, has commented on the expected House of Commons vote on the future of Trident as David Cameron prepares to resign his role as Prime Minister today (Wednesday 13th July).
The Prime Minister had previously announced that MPs would vote next Monday (18th July) on whether to proceed with renewing the Trident submarine fleet.
The existing Vanguard fleet of submarines were due to become obsolete by the end of the next decade. Next week’s vote would approve the building of four successor submarines.
Tim Roache, GMB General Secretary, said “We’ve had enough of politicians on all sides playing politics with tens of thousands of highly skilled jobs and the communities they support.
The Government needs to get on with a proper vote on maintaining the fully fledged Trident system that gives much needed stability and security to workers and the industry as a whole. The Labour Party needs to stick to its democratically decided policy for a credible, continuous at-sea deterrent.
This is about the future of British jobs, workers, communities and livelihoods. Politicians now need to get on with their jobs instead of the very sort of Westminster bubble party politics GMB members – and the public at large – are sick to the back teeth of.”